I am thrilled to debut the super cute book trailer for The Mapmaker & The Ghost! Up first, a quick interview with debut author Sarvenaz Tash. Kick back and follow the jump for the book trailer. 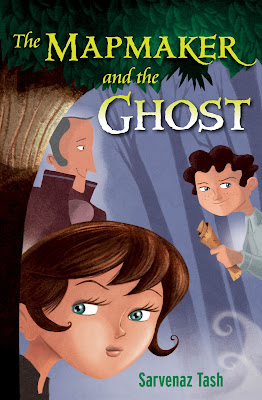 What was the working title of MAPMAKER?
Oh, boy. I am notoriously awful at titling things. We went through a list of 72 suggestions before we hit upon The Mapmaker and the Ghost. I will tell you that when I first started writing it, it was called - you'll laugh - Goldenrod Moram and the Spitbubble Master. Yes, that is awful. For a bit of time, it was also called The Legendary Adventures of Goldenrod. Which I do still like, though I think The Mapmaker and the Ghost is really what it was meant to be all along.

When talk of cover art first started, what were your concerns and what did you want most?
You know, I really didn't ever visualize the cover because I knew that it probably wouldn't look like whatever I thought it should in my head so why set myself up for that? I also knew that there were going to be professionals working on it who were infinitely more talented in that department than I was. I was just excited to see what they came up with and I was not in the least bit disappointed. The illustrations by Gerald Guerlais were more beautiful and perfect than anything I could have ever dreamed up.

Can you talk about the two different looks for the book?
So the original cover (the one with 10 characters on it) was revealed in June 2011 and it was a cover I lived with and fawned on and adored for 6 months. Eventually it was decided that it was ultimately too crowded for the cover of the book. So I found out it was changing in December. I admit it was a bit of a shock to have the face of the book change like that. But, ultimately, I think they did an excellent job redesigning and finding space to put the rest of my characters on the back. I've also heard many people say they like the new cover better so obviously they know what they're doing!

Who is behind that awesome British accent in the book trailer?
Oh, I'm so glad you asked! That is one Rachel F. Hirsch. She is an amazing actress and voiceover artist who happens to be a good friend of mine. A while ago we had had a conversation where I told her how I thought she would make a fantastic Disney princess (she is also a phenomenal singer) and she mentioned that's always been a dream of hers. When it came time to do the trailer, I knew right away that she would get the "storybook" feel of the piece. Honestly, I gave her almost zero direction. Its awesomeness is all her.

Any book birthday plans?
Yes! I'll be having a launch party on Saturday, April 28th at BookCourt in Brooklyn, NY. There will be cupcakes and me signing things likely while being all nervous and awkward. Doesn't that sound like fun?! Everyone's invited so if you're in the neighborhood, do consider dropping by. Here is the Facebook invite with all the details.

Thank you, Sarvenaz! If I was close to Brooklyn, I would be there! Now, without further ado, I give you.....the debut book trailer for The Mapmaker & The Ghost out April 24th, 2012 from Bloomsbury-Walker.


Super cute, right? I just love the narration and I can definitely hear the humor. I can see why Tash wanted  Rachel F. Hirsch to be a part of the trailer. I can't wait to pick this one up, and hope that you do too!