I am THRILLED to have debut author, Meredith Zeitlin on the blog today! Her book, Freshman Year & Other Unnatural Disasters, is being released today! It is the, by far, the funniest and sarcasmatic book I've read in a very long time. I hope you all pick yourself up a copy. Welcome, Meredith! 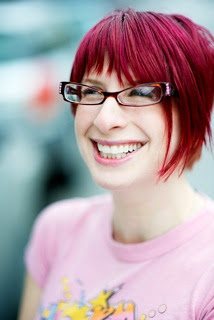 You were a, uh....theatre geek (ducks) and a gifted singer. Anything online I can take a gander at?
Hey, I went to Stagedoor Manor and Northwestern. How could I not own being a theatre geek!? So no need to duck... YET. (Mwahahahaha.)

I don't think there's anything online of me singing, except maybe a clip or two on my cartoon reel, though I'm voicing a little girl and a fish in those, so maybe not a great example. But here is a LINK to the playbill notice for an off-broadway show I was in about a thousand years ago before I stopped performing onstage. You may recognize my castmate and friend Billy Eichner, who is now starring in his own hilarious show on Fuse (very proud of him, obv)! Oh, and also me looking totally hideous. What is that pose about, exactly?!

Here is a duet with a darling boy named Patrick Gagnon. I come in second... no idea how to alter the beginning, so your readers can just enjoy the whole thing. This is "Email Love Song," and it is about email. (because at the time email was brand new.) This is from the 1997 Waa-Mu show, Northwestern's huge (and huge deal, believe it or not, as in "stayed up all night to find out if I got cast") student-written musical. I was a freshman and it was a CRAZY huge deal that I had an actual part in the show with my own song - only 2 freshman girls were cast, period. Once again, I had juniors getting mad at me. Getting cast was one of the non-disasters. There were, of course, many disasters (like almost puking on the director after my audition because I was so nervous, for example). But that's a different post... ;)

Can you dish a little bit about the cover for FRESHMAN YEAR?

Well, I knew from a friend's experience with her debut novel that I would have exactly zero say about the cover - so I was prepared. The only thing I asked (read: begged) for was that they not use a picture of a real girl on it, because I always like to make up what characters I read about look like. Also, sometimes they change the covers later and put a different girl on there and you end up being like, "What!? That is NOT what Anastasia looks like at ALL!"

So, imagine my delight when I got an email from my editor saying they had actually compromised and only showed PART of a real girl on the cover! (I figure that, all things considered, I totally won that one. Right?) Anyway, I completely love the cover, exactly as it is. I think the artist totally captured the feeling of the book - and wait til you see the hardcover version! There are sparkly shiny raindrops on it and the writing under the dust jacket is hot pink!

Who is the Kelsey Finkelstein in your life?
That... would be me. Almost everything that happens to ol' Kelsey in the book actually happened to me at around the same time. Names and some details have been changed to protect the innocent, of course, but otherwise... welcome to my life. (It's okay. You can run. Escape while you can!) 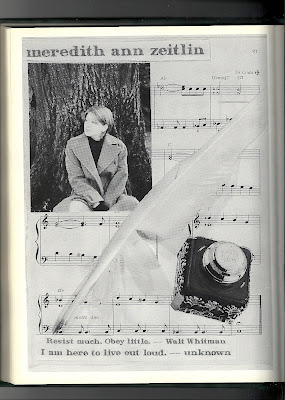 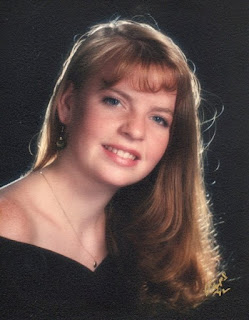 Jen's Senior picture
Kelsey's mother loves nonsensical sayings like, "If you don't like it, you can bang your head against the wall and spit wooden nickles." Did you mother say things like that and have you turned into your mother yet? (I have).
My mother said every one of the insane things you read in the book and many, many more. I haven't COMPLETELY turned into her yet, but I'm on my way. I don't really look like her at all, but I definitely have all her facial expressions - there are many times I've caught a glimpse of myself in the mirror and thought: "Oh, God. It's all over. I give up." Especially the time I dressed as a demonic Jackie Kennedy for Halloween - a costume I labored over, by the way - and realized I had actually dressed as one Marcia Zeitlin. With a bloody knife, obv.

Kelsey and Cassidy have a falling out over a boy. When are girls going to learn that boys have cooties and they really aren't worth the trouble until they are about 27?
My best guess, based on my own life experiences... is never. That said, I think the older we get, the less likely we are to fight with each other over boys, and instead just fight with ourselves. I myself am triple-certified in the art of self-sabotage and the over-analyzation of romantic relationships (classes available by request). As far as boys being finally worth the trouble after THEY get a bit older... you meant 37, right? Or maybe 47? Sigh. Now I'm depressed. What's next for you? SOPHOMORE YEAR & EVEN MORE BROKEN TEETH AND FLYING FAKE BEARDS? Just a thought....
Have you been spying on me?! Actually, I am working on a second book - it's not exactly a sequel, but it takes place in the same world, so you'll be seeing some of the characters again. And after that... who knows? Maybe Kelsey will have her second shot at glory!

Any plans for you to make your way to Texas? We're kind of a big deal, ya know!
I would love to come to Texas! I've never been there, actually. If Putnam wants to send me, I'll be there straight away. Can I stay at your place?

Yes, you can! Mere, that's what I call her, has been such a gem during this interview. I cannot thank her enough for the photos and audio clip of her singing. She went over and beyond for me and this little blog I got going on here. Author are rock stars! I promised to post my senior pic if she did too...there ya go. Lol!
Add to Goodreads
You can find Zeitlin at her website
Like FRESHMAN YEAR on Facebook

Lucky you, one copy is up for grabs! Fill out the official doo-hickey to be officially entered.