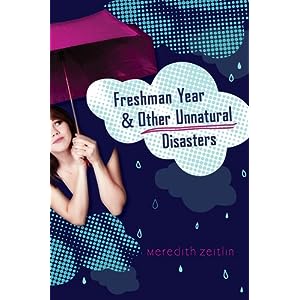 Freshman year will be the start of something new for Kelsey Finklestein. She is determined to make her mark and get herself noticed. Try out for the school musical, grab a starting spot on the soccer team, nail down the cutest boy in her class, whatever it takes...Kelsey is going for it! Within just a few days into the new school year, Kelsey has gotten some attention, all right. Only, not in a good way! She is the target of a scary (and quite large) soccer team captain and gets a lot of neg publicity from the school newspaper. Why is her picture always plastered on the front page when she is looking her worst? She decides to take the bull by the horns and find out who keeps snapping bad photos of her. Just as soon as she tracks down The Crush and gets fitted with a fat suit and beard? Wait, what?

I must say, I really loved this story! At the time I read FRESHMAN YEAR, I was looking for a light and easy peasy read. Not every book needs to be packed with vital life lessons or tearful realizations about life. Sometimes, a classic tale of teen angst is on the menu. Kelsey's humor is right up my alley. She has a smart tongue and a sarcastic edge that I totally appreciate. Kelsey isn't whiny or have this continuous "poor me" attitude about all of her mishaps. She takes it all in stride and does her best to right any situation.

The relationship between Kelsey and her mother was the icing on the cake! I literally laughed out loud when those two but heads. They have a constant tug-of-war going on and neither one comes off looking dumb and degraded. Just hilarious dialogue between a mother that reads into everything, and a girl that just needs some space. I can totally relate. I was a teenager back in the black and white days and I have a 16-year-old now. I swear some of those scenes came from right here in my house.

When you're talking about girls in high school, you know there are boys in the picture. Kelsey has had the hots for the same boy since she came out of her mother's womb. Now that his too-perfect ex is out of the picture, Kelsey pounces on the opportunity. Like everything else in Kelsey's life, that doesn't exactly go according to plan. Friendships are more than tested and the claws come out. Kelsey has a pretty cool crew made up of three best friends. They all have very distinct personalities and voice. When The Crush comes in between the two friends, the other girls stay neutral. Each girl stays friends with opposing sides and refuses to pit people against one another. Well isn't that refreshing! Maybe there is a little lesson in this book afterall.

A perfect sarcasmatic book packed full of laughs and mishaps! Definite must read!