Where's Winona & What Is a Blovel with author Abbey Campbell 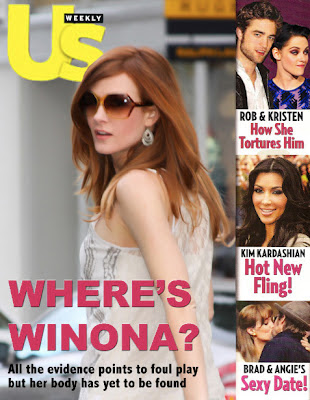 What is a "blovel?"
A blovel is a novel serialized on a blog. What's so great about a blovel? Well, just like a blog it's free so you can read it on your computer, tablet or phone. Also, it has pictures! Because what's better than reading about tight rippling abs? Pictures of tight, rippling abs! Is this the future of fiction? Let's hope so.

Why did you decide to blovel instead of maybe self-pub?
I was working as an editor at PopSugar.com and it was during the time when many young stars were running around Hollywood without any underwear on. My coworkers and I got to see these pictures firsthand and we were just as confused and shocked as everyone else. Britney Spears was the biggest surprise to us. She had been portrayed as such a good girl up until then. It got me wondering how someone goes from telling the world she's saving herself for marriage to getting out of a car without panties on in front of a throng of photographers. Had her people just been able to hide who she really was that whole time? Was she on drugs? Or had a Britney Spears look-alike stolen her identity and the real Britney Spears was tied up in a basement somewhere? Anyway, that's how the story came to me. And I knew it had to be told through a blog and would have to have pictures. Of course there is a downside to doing it this way. None of my friends wanted to play Winona so I ended up having to do it myself. During my creative process I may or may not have had to trespass onto private property, go out in public wearing not much more than a coat made of Care Bears, and grope my husband in a public hotel bathroom while his best friend stood on the sink and took pictures. So there's that. 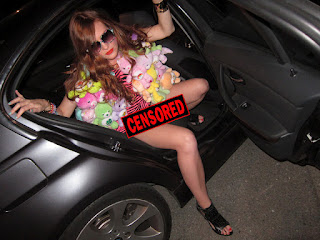 What are the benefits of writing a blovel instead of a traditional novel?
So many! The pictures, for one. I think they add a fun element to the story and some of them even hold clues to the mystery. Also, the characters can interact with each other and the readers in the comment section. Besides that I get instant feedback from my readers so I know which characters are the most popular, and what people want to see more of. Stuff to keep in mind as I'm rewriting future posts. You don't have that advantage with a book--it's a done deal and can't be changed once its printed.

Is Winona's story complete? How long will her story go?
I wrote most of the story ahead of time and it's about the length of a regular novel. It should be done by the end of May, unless I decide to change the ending at the last minute (another benefit of the blovel).

Is there a book version now?
No, but I might rewrite it as a book somewhere down the line.

You posted a picture of you (as Winona) and John Mayer photoshopped together on the blovel as part of the story line. Has John Mayer seen this photo?
I assume he did. A few days after I posted it he started following me on Twitter. I'm kind of super excited about it (also very grateful he didn't sue me). 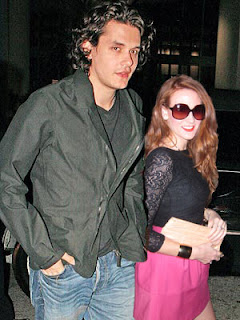 I want to see myself in WHERE'S WINONA? Can that happen?
Yes! I'd love to have pictures of more of the characters. Just post a picture of yourself dressed as the character you want to play on the new Where's Winona Facebook page. Don't worry about nationality, hair or eye color. If I think it's a good match, I'll change the description of character and put it up on the blovel! Or you can email a pic to me at: abbeycampbellcook@gmail.com

How do I start reading Where's Winona from the beginning?
It's easy. Just click here!

Thank you, Abbey for the great interview and hilarious pictures! I love this new and inventive way to bring a story to a reader. My daughter is an avid magazine reader and I can see her loving something like a blovel. Dear Winona certainly opened my eyes!
at Thursday, April 12, 2012