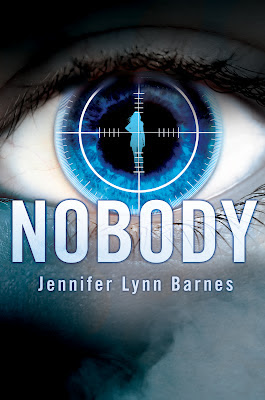 Nobody by Jennifer Lynn Barnes
January 22nd, 2013 from Egmont USA

There are people in this world who are Nobody. No one sees them. No one notices them. They live their lives under the radar, forgotten as soon as you turn away.

That’s why they make the perfect assassins.

The Institute finds these people when they’re young and takes them away for training. But an untrained Nobody is a threat to their organization. And threats must be eliminated.

Sixteen-year-old Claire has been invisible her whole life, missed by the Institute’s monitoring. But now they’ve ID’ed her and send seventeen-year-old Nix to remove her. Yet the moment he lays eyes on her, he can’t make the hit. It’s as if Claire and Nix are the only people in the world for each other. And they are—because no one else ever notices them.

Check out the Prologue:

Nine letters. Two words. He refused to think of them as a name. With detached objectivity, his steady hands set the thin white paper, with its evenly spaced black lettering, to the side.
He’d done this before.

He’d do this again. More needles, more knives. More evenly spaced black letters that carved themselves, blood-red, into the recesses of his mind.

The only way you can make a difference in this world is to kill.

Add to Goodreads
You can find Barnes at her website

Jennifer Lynn Barnes will be attending the Austin Teen Book Festival this year! Check them out on Facebook, Twitter, and their website! I am thrilled to run PR and Media for the fest - join us September 29th in Austin! The lineup is epic and you don't want to miss it!

Egmont has a mega awesome prize pack for one lucky US/CAN winner: all three Raised By Wolves  titles, a copy of Every Other Day, and an ARC of Nobody in a cute Egmont bag with tattoos! Shoot over HERE and enter today! Ends 8/18