Welcome to the Doomed Scavenger Hunt! Over the next eight days, Tracy Deebs and Mundie Moms are sending you on a scavenger hunt through eight different blogs. In Doomed, the three main characters embark on a scavenger hunt that winds itself through a video game and the real world in order to stop a countdown to nuclear annihilation.

Our scavenger hunt is nowhere near as complicated-- or as scary-- as what Pandora and her friends have to go on. Instead, all you have to do is visit the eight sites, read the excerpts and find the hidden number in each of the entries. At the end of the eight days, add up all eight of the numbers and include them in the Rafflecopter entry spot for the Scavenger Hunt to earn 10 extra entry points for $75 gift card to your choice of Amazon, Barnes and Noble or Apple. There are also prizes to be won at every stop, so make sure to get your entries in and be sure to comment on each of the blogs to be entered to win. Happy hunting!


I wake up a few hours later to see Theo stoking the fire.  “Did you do it?  Did you find a way in?”
“Not yet.”  His voice is grim as he drops down beside me.
“You’ll do it.”  I scoot forward and press a hand to Theo’s cheek.  He looks so tired, so worn down, yet so much like a warrior, with his bruised face and battered body.  Not to mention the badass gleam in his eyes that tells me he’s determined to run this thing down.  It’s hard for me to imagine I once thought he was crazy.
He closes his eyes at the first touch of my fingers.  He doesn’t move away, so I trace one of the many cuts that still decorates his dark-angel face.  He pulls in a sharp breath and I yank my hand away.  “I’m sorry.  Does it still hurt?”
“No.”
“Oh.”  I put my hand back, lightly brush my fingers over the bruise on his high cheekbone, then move down his strong jaw to the cut on his chin, and over the small slices from falling debris that decorate his cheek.  So many different injuries.  So many different times he didn’t back down when a  normal guy would have.
I pause at  his full lower lip, then sweep my finger over the scrape there, toying with it.  He looks at me again and this time his eyes are so dark that I can’t distinguish his pupil from his iris.
I know I’m playing with fire right now, know I should take my hand away just as I know that I’m not going to.  I can’t help myself, don’t want to help myself.  For days I’ve sat by and watched while Theo stayed cool and calm and in control, no matter what happened.  I’ve watched him get beat up for me, shot for me, seen him do things that only someone incredibly brave or incredibly stupid would do, again and again and again.
It’s hard to forget all of that, hard to think that it didn’t mean something to him.  Because it meant something to me, means something to me still as he continues to battle to save the world.   I’ve never kissed Theo, but sitting here, touching him as dawn streaks across the sky, feels a million times more intimate than anything I’ve ever done before.
“Pandora.”  His voice is hoarse, but he doesn’t move away from my touch.  In fact, he moves towards it, turning his head just a little so that both of his lips are pressed against my fingertips in the softest of kisses.
He stands up abruptly, pulls me outside.  My dad and Eli are asleep but I understand his need for privacy.  I feel the same way.  Out here, as red and purple and orange streak across the early morning sky, I don’t want to think about everything that’s waiting for us, all the responsibility we still have to carry.  I just want Theo to kiss me.
It’s cold out, the wind harsh, but I barely feel it as Theo presses me back against the house.   His arms come around me and he holds me to him, his chin resting on the top of my hair.  “This isn’t the right time,” he tells me.
“I know.”
“Everything’s messed up, confused.”
“It is.”
He smiles against my hair.  “You don’t care, do you?”
“Not really.  Not anymore.”
“I really like you, Pandora.  I don’t want to make a mistake with you.”
“Life’s full of mistakes, Theo.  And if you don’t kiss me now, when are you going to?  We’re almost out of  time.”
“Yeah.  You’re probably right.”
And then he does.
He puts a finger under my chin, tilts my face up until I’m looking him in the eye.  Then he lowers his mouth to mine.  And I was right. I’ve never, ever felt anything like it.
It’s fireworks after a baseball game, a cool dip in the pool on a sweltering, summer day.
Front row tickets at a kick-ass concert.
It’s the sweetest melody I’ve ever heard, playing in my head again and again and again.
I don’t ever want it to end.
I press myself against him, wrap my arms around him and tangle my fingers in the cool silkiness of his too-long hair.  The hair that should have been a tip-off about who he really was all along.
His arms harden around me, his hands clenching at my back as his lips move gently against mine.  His tongue comes out, traces my lower lip and I gasp at the sweetness of it.
Theo laughs a little and then he’s kissing me, really kissing me, his tongue sliding against mine as rockets—forget the fireworks—launch all around us.
I laugh, too, even as I draw him deeper.  He tastes like spicy cinnamon and smooth, sweet caramel. He tastes like hope, which I need more now than I ever have before.
He starts to pull away, but I stand on my tiptoes, yank his mouth back to mine.  I’m not giving this up—not giving him up—at least, not yet.  I want to hold him to me a little longer, to take his light inside of me until it burns so brightly that nothing diminishes it, not even this nightmare we’re both locked into. 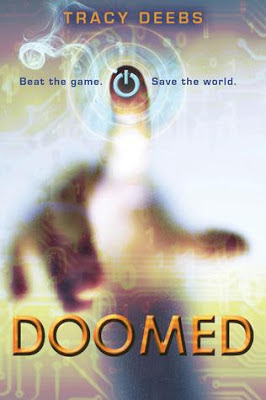