I am happy to have Amy Timberlake on the blog today! You might know her from her picture book The Dirty Cowboy or That Girl Lucy Moon.

What came first? Plot, character, or setting?
Setting. Wait! That isn't completely true. What is true is that setting seems to be my impetus for putting butt-in-chair and writing a particular story. In the case of One Came Home, being infuriated by the sisters in “Taming of the Shrew” was probably the true beginning. See, about a year before I started writing the book, I saw a fine production of Shakespeare’s play and became downright agitated over Kate and Bianca’s relationship. Ranting? Yes, lots. I believe I even told my husband I was going to write a novel that would “fix it.” (I know, I know… fix Shakespeare? Yeah. . . .) But did I at least start writing? Nope.

Nothing truly transpired until I read about a passenger pigeon nesting that occurred in my home state of Wisconsin in 1871. This nesting was the largest ever recorded—a historian estimated its size as 850 square miles. Whoa—that’s a lot of nesting, and a lot of birds. Why I hadn't I heard of this? I should have heard—I grew up in Wisconsin!
Anyway, after that, I started writing One Came Home in earnest.

What was your working title for One Came Home?
“Pigeon-shot.” That’s what people in 1871 called the shot used to shoot pigeons. I still like that title. This story is a western, and “pigeon-shot” evokes that.

But other people did not like the title—lots and lots of other people (as a matter of fact)—and for all sorts of quality reasons. So I changed it to One Came Home. The new title raises the question of who doesn't come home. Nice!

It's hard to believe that Georgie is just 13-years old when you consider her brilliant use of a gun and her quick wit. Was that typical in the 1870s?

I think we can safely say that kids grew up quickly in the 19c. There was plenty of hardship. For instance, kids fought in the Civil War. After the war, I've read of kids as young as fourteen migrating west and working on farms and ranches. In general, children were given lots of responsibility, and parents—more often than not—were stern taskmasters. In my novel, much is expected of Georgie, and she has to deliver. Her wits are sharper for it.

Would she be able to fire a gun? My fictional, 1871 town in Wisconsin isn't the world of the upper class in Baltimore, Chicago, or New York City, so yes, I think she’d know how to fire a gun. Would she be so talented at shooting? I chose to imagine her that way. I’ll say this: Georgie is exceptionally good at shooting.

Recently, I was reading a biography of a radical temperance worker of the same-ish period. This girl grew up to be a crusader who spoke on a lecture circuit, published newspapers, divorced, and marched into taverns to chop open barrels of booze with an axe - I mean, that’s not what you think of when you think “nineteenth century woman!”

Is Georgie exhibiting typical behavior for an 1871 thirteen-year old girl? Probably not. Still, every person has something extraordinary that they do, or have experienced, or something else. So is it typical to be someone with extraordinary characteristics? Yeah, sure! And as a reader, I want to be told a story about the extraordinary. By the way, I believe everybody has the extraordinary, and part of my job as the writer is to find it.

Georgie's sister Agatha longed to be more than just a wife and mother. What were the odds of a woman having a successful career in 1870s Wisconsin? What were the choices for a woman in that time?
Women didn't have many choices. (There are a lot of good histories about this time period, so I recommend picking up a few books and diving in.) But my reading of the history suggests that women mostly married into their work. Basically, if you married a farmer, you were going to farm. If you married someone who owned a shop, you were a shopkeeper. And of course, as a woman, you’d bear children.

If you didn't get married, there wasn't a lot of choice. You could earn a teaching certificate and teach children. In the cities, there were single women living in women-only boarding houses who were working in factories and other jobs like that. In my research, I came across a group of young women who traveled around Wisconsin as field workers. They worked in the hops fields and were called “Hops Girls.” (This isn't a complete list of women’s options, but you get the idea.)

Well-to-do women did have skills in the arts. It was considered feminine to say, do embroidery, play an instrument, and to sketch and paint, etc. Also, it seems that the natural world was open to women as a sort of “passion.” Years ago, I was surprised to find women naturalists pretty early in our history. These were women who got into the natural sciences through botanical illustrations; or who tracked, shot, and stuffed species for World Fair exhibits or museums. Some of these women wore pants and camped. These were definitely extraordinary women, but they did exist. There’s a great collection of biographies of these women in Marcia Myers Bonta, Women in the Field: America’s Pioneering Naturalists. I recommend it!

I love stories that show positive sibling relationships, and Georgie and Agatha are great examples! Would this book have worked so well, and it really does, if they weren't so close?
Glad you think the book works—thank you! I don’t know how it would have changed if I’d told the story of siblings who can’t stand one another, or who respect one another but are unable to communicate. But I suspect you’re right. With a different sibling relationship, it wouldn't be One Came Home.

At the end of the story, Georgie has a change of heart when it comes to her gun and hunting. Can you explain why this was important to the story?
Hmm. I guess I’d say that by then Georgie has given death, and life, and what it means to be alive, a lot of consideration. She knows death—in others, in herself. She has walked the line between living and dying. Therefore, she knows life’s value. And she sees it in the living around her. So ending a life? It’s no longer something she can take for granted.

Thanks for this interview, Jen! I enjoyed this!
Thank you, Amy!

Stay tuned tomorrow for a giveaway of One Came Home. You will get an extra entry when commenting on this interview! 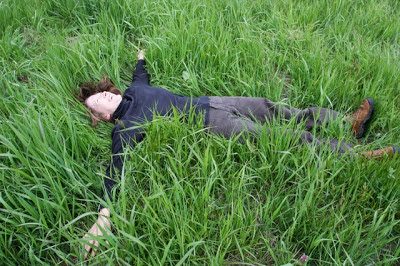 Amy Timberlake grew up in Hudson, Wisconsin. She has an M.A. in English/Creative Writing from the University of Illinois at Chicago, where she’s also taught writing. She’s worked as a book reviewer, a book event coordinator, and as a children's bookseller. Her previous books include That Girl Lucy Moon and The Dirty Cowboy. The Dirty Cowboy was illustrated by Adam Rex and won SCBWI's Golden Kite Award. That Girl Lucy Moon was chosen as a Book Sense Pick, a NYPL’s “100 Titles for Reading and Sharing,” a Bank Street Best Children’s Book of 2007, an Amelia Bloomer Book, and the winner of the Friends of American Writers Literary Award. Amy Timberlake lives with her husband in Chicago. Learn more about her life and work at her website: www.AmyTimberlake.com

Check out her Pinterest Board on passenger pigeons HERE
at Tuesday, January 08, 2013