I am thrilled to have Cynthia Hand back at the blog today with a deleted scene!! Check out the rest of the tour HERE for giveaways, reviews, and more behind the scenes to the Unearthly series. Let's get to reading...

Okay, I know I promised a deleted scene with Christian and Clara on a bicycle, but I have scoured my computer for two days now and CANNOT FIND IT—ACK!  Here, instead, is another deleted / alternate scene between Christian and Clara. This scene was cut but some of the dialogue made it into a later scene in the book. I had to cut it off where it ends here because back then Clara was having a different vision that is quite spoilery to the way BOUNDLESS plays out now. I hope you like! (I’ll keep looking for the bike scene. It was swoony.)

This is not a date. Christian and I are simply sitting together on a blanket in Old Union Courtyard, a few minutes after midnight on our first Saturday night at Stanford, waiting for them to start playing The Hangover II on the giant screen they’ve set up at the edge of the grass. This is not, I repeat, a date. He asked me if I wanted to hang out tonight, and I said yes since the alternative is the poetry slam that Angela’s going to with all the artistic-type freshman.
Here’s what I said when she tried to convince me to go with her:
There once was a girl named Clara
Whose poems were oh-so-unbeara (ble)
Her poems were so bad
They caused puking in scads.
Now her nickname is Clara the terrible.

“If you drag me to this thing I am totally going to recite that,” I said. “Thus ruining my reputation forever, and quite possibly yours.”

“Um, okay,” Angela had replied. “I’ll fly solo on this one.”
A movie sounded nice. Especially a comedy.
Christian passes me a bag of popcorn. “So, what do you think of your roommate?”
I shrug. “Her name is Wan Chen. She’s really nice, from what I gather, but she hasn’t said two words to me. I don’t think she’s too comfortable speaking English yet.”
“You should tell her that you speak Chinese,” he suggests.
“Yeah, but then I’d have to explain why. So what’s your roommate like? What’s his name?”
“George. He’s fine. He’s already come home fall-down drunk two times this week, from various parties. I think he must have had very repressive parents and now he’s determined to live it up.”
We munch our popcorn.
The movie is starting. I look up. Overhead the sky is pink and grayish, illuminated by the lights of the city, but in the center there’s a pocket of black, a few bright stars.
I say, What really gets to me is that my mom knew about you, that whole time. She knew that my purpose wasn’t to save you.
My uncle knew, too, he admits. At least I think he did.
So why didn’t they tell us?
I don’t know, he says. You know how you said that your visions felt like a test? Maybe us not knowing about each other was part of the test.
If that’s the case, I failed the test, I think. At the very best I got a D minus.
It depends on what you were being tested for, Christian says.
Last year you said it wasn’t a test.
He gives me the mental version of a shrug. What do I know about anything?
You know a lot more than I do.  It’s been over a year since the fire and the vision still lingers bright in my mind, the burning hillside, the way Christian said, It’s you, the way it felt when he took my hand. It never happened, but it feels like a memory.
We need a change of subject. “So have you decided on a major?” I ask.
He looks embarrassed. “I’m thinking about architecture. Is that stupid?”
“Why would that be stupid?”
“Oh, I don’t know. Because I don’t know how to draw.”
“Don’t they have computers for that nowadays?”
He smiles. “It feels like I’m kidding myself, picking architecture as a major.”
“Well at least you’ve picked a major, which puts you light years ahead of me.”
I’m never going to be an architect, he says, and there’s the flavor of bitterness in my mind.
Why not?
He sighs. I look over at him. He’s watching the screen, the light playing across his face. Around us the other students are laughing, but here we are, sitting here having a serious conversation in our brains. We are freaks.
Yes, we are, he says. Sighs again. Do you really think we’re going to be allowed to live normal human lives?
Maybe. I mean, my mom did. Mostly. Mr. Phibbs is a teacher. Billy’s a hippie. Carolyn’s a nurse. And Walter has a day job, right?
He had one, he says, and his mind fills with grief. I think now he’s officially retired.
He meets my eyes, and I know without having to ask that Walter’s dying and that it’s the one hundred and twenty years rule. God wants us to be mortal, and so we have a human lifespan. It makes sense, sort of, but it still doesn’t feel fair that Christian will lose his uncle, the only father figure he’s had all these years, the only person who’s been watching out for him since his mother was killed, because of a rule.
“When?” I whisper.
Soon. A few weeks, is his best guess. He doesn’t want me to be there, he says, and there’s a hurt in his tone that makes my breath catch. He doesn’t want me to see him like that.
I understand. At the end my mom was so weak she couldn’t even walk to the bathroom. That was one of the worst parts of it, the indignity of it all. It wasn’t like she was in pain the way she would have been if she’d been dying of cancer, which is what we told people, but it wasn’t a clean death. It was her body giving out. Fading away. Slowly.
He swallows, hard, and looks so brave about it that my eyes burn with the tears he’s holding back. I’m sorry, I want to say, but I know the words won’t mean anything. Instead I reach across the blanket for his hand. His skin is warm, like always, and, like always, there’s something that passes between us when we touch, our power like an electric current flowing from his body to mine.
I try to smile, and he tries to smile back, and we both don’t quite manage it.
So tell me about your new vision, he says as a change of subject, but he doesn’t let go of my hand. Am I in it?
He wants to be in it. He wants to be part of my purpose the way I am part of his. I nod. I try to frame the words, but I don’t have to. All I have to do is hold onto his hand and let him see inside me, that space in my head that’s holding the dark room, the sword made of glory, Christian, and. . . 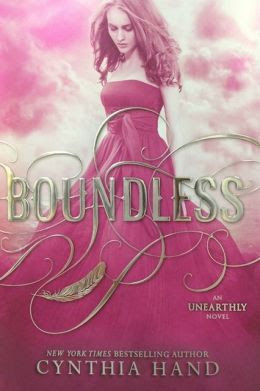 The past few years have held more surprises than part-angel Clara Gardner could ever have anticipated. Yet from the dizzying highs of first love, to the agonizing low of losing someone close to her, the one thing she can no longer deny is that she was never meant to live a normal life.

Since discovering the special role she plays among the other angel-bloods, Clara has been determined to protect Tucker Avery from the evil that follows her . . . even if it means breaking both their hearts. Leaving town seems like the best option, so she’s headed back to California - and so is Christian Prescott, the irresistible boy from the vision that started her on this journey in the first place.

As Clara makes her way in a world that is frighteningly new, she discovers that the fallen angel who attacked her is watching her every move. And he’s not the only one. . . . With the battle against the Black Wings looming, Clara knows she must finally fulfil her destiny. But it won’t come without sacrifices and betrayal.