Guest Post & Giveaway: The Theory of Everything by Kari Luna 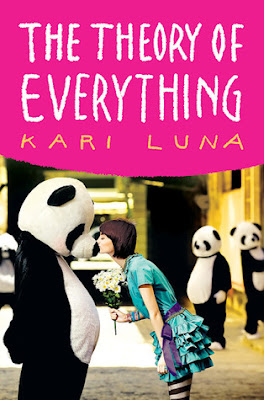 The Theory of Everything by Kari Luna

Sophie Sophia is obsessed with music from the late eighties. She also has an eccentric physicist father who sometimes vanishes for days and sees things other people don’t see. But when he disappears for good and Sophie’s mom moves them from Brooklyn, New York, to Havencrest, Illinois, for a fresh start, things take a turn for the weird. Sophie starts seeing things, like marching band pandas, just like her dad.

Guided by Walt, her shaman panda, and her new (human) friend named Finny, Sophie is determined to find her father and figure out her visions, once and for all. So she travels back to where it began—New York City and NYU’s physics department. As she discovers more about her dad’s research on M-theory and her father himself, Sophie opens her eyes to the world’s infinite possibilities—and her heart to love.

Add to Goodreads
You can find Luna at her website
Kari Luna will be at BookPeople on 8/20!

Sophie Sophia from The Theory of Everything may be from New York, but she's a Texas girl at heart. Why? Because she sees things. Big, imaginative things like giant shaman pandas, which is totally Texas. (I should know. I'm from here!) To get through the weirdness that's her life, Sophie makes survival lists. So she made this one, just for I Read Banned Books. May it help you cool off – even if you're not a giant panda. 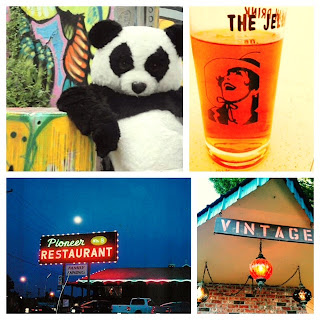 1. Drink iced tea. Rivers and rivers of it.
2. Curse your fur while hiding in air-conditioned vintage shops. (Oooh! Try on a fedora.)
3. Jump the fence into someone's private pool. (Trust me. NO PANDAS ALLOWED signs don't exist.)
4. Hang out at Book People in the Travel section. Near the Arctic books.
5. Check into the Austin Motel and ask for the Mediterranean Room. (Runner up: Blue Waters.)
6. And finally? Wait until the sun goes down. There's nothing like a big, starry Texas sky to make you forget you were hot in the first place.

Win this super cute TTOE Poster and Button Pack! Fill out the fancy doo-hickey to be officially entered. US only, good luck! 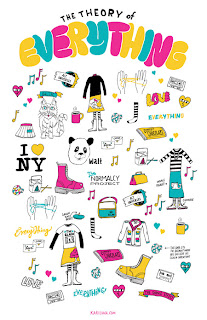 Kari Luna is a teen novelist and whimsicologist. Her YA debut, The Theory of Everything, combines string theory, 80's mixtapes and shaman pandas in one book without making you dizzy! Almost. Watch the awesome video tha twas shot right here in Austin: http://bit.ly/14wQdlp. And find Kari, here: www.kariluna.com tweet: @wordette blog: blog.kariluna.com
at Thursday, August 15, 2013