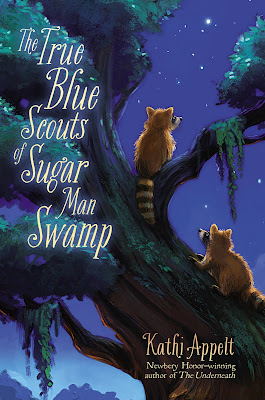 Meet Bingo and J’miah, raccoon brothers on a mission to save Sugar Man Swamp in this tale from Newbery Honoree Kathi Appelt.

Raccoon brothers Bingo and J’miah are the newest recruits of the Official Sugar Man Swamp Scouts. The opportunity to serve the Sugar Man—the massive creature who delights in delicious sugar cane and magnanimously rules over the swamp—is an honor, and also a big responsibility, since the rest of the swamp critters rely heavily on the intel of these hardworking Scouts.

Twelve-year-old Chap Brayburn is not a member of any such organization. But he loves the swamp something fierce, and he’ll do anything to help protect it.

And help is surely needed, because world-class alligator wrestler Jaeger Stitch wants to turn Sugar Man swamp into an Alligator World Wrestling Arena and Theme Park, and the troubles don’t end there. There is also a gang of wild feral hogs on the march, headed straight toward them all.

The Scouts are ready. All they have to do is wake up the Sugar Man. Problem is, no one’s been able to wake that fellow up in a decade or four…

Add to Goodreads
You can find Appelt at her website

I am happy to have fellow Texan Kathi Appelt on the blog today talking about Texas! We're kind of a big deal, you know! Welcome, Kathi Appelt!

I recently had some friends from Virginia come visit me. It was their first trip to Texas, and as soon as they pulled into our drive, they remarked that they were surprised to see so many trees. I’ve heard other non-Texans say this same thing. It always catches me off-guard. My Texas is filled with trees.

I think that the common notion of Texas is one that was created by the old Western movies. Films like "Giant", for example, where the tallest plant is a knee-high prickly pear cactus, have created an image of a state that is mostly dry and mostly tree-less.

But a large part of the state—in fact, most of the part that is east of the Trinity River—is definitely filled with trees, and the closer one gets to Louisiana, the taller the trees become.

Those tall pines, rising out of the wet red dirt are where my stories tend to grow. I was raised in Houston, which was built on a marsh, and I also spent some time in deep East Texas where the trees are so close together, they block out the sky. That same forest, with its slow-moving bayous, has a wholly different kind of magic than the kind you might find in the canyonlands to the west. Whenever I walk through those piney woods, I feel like I’m in a place that is old, primeval. All my senses tune up, and I’m aware that there are likely creatures watching me that I can’t see. I’m also filled with the wonder of it. It seems like magic is all about me, magic that is found in the songs of a million green peepers and the shivering rustle of long-leaf pine needles. There’s nothing else like it.

I appreciate the western side of my home state, and I’d like to set a story there some day. I love those old western movies, and especially those guitar-playing cowpokes. But I’m happy in a location where the dampness in the air is so thick it settles on my skin like a blanket, and a thousand stories wait to be uncovered.

Yep, there are plenty of trees in Texas. And plenty of stories to be told, too. Come visit me. I’ll show you the trees, and you tell me a tale. It doesn’t get better than that.

I am happy to offer one lucky winner a copy SUGAR MAN SWAMP. Fill out the fancy do-hickey to be officially entered. US only, good luck!

Watch these two rascally raccoons in the most adorable book trailer ever: