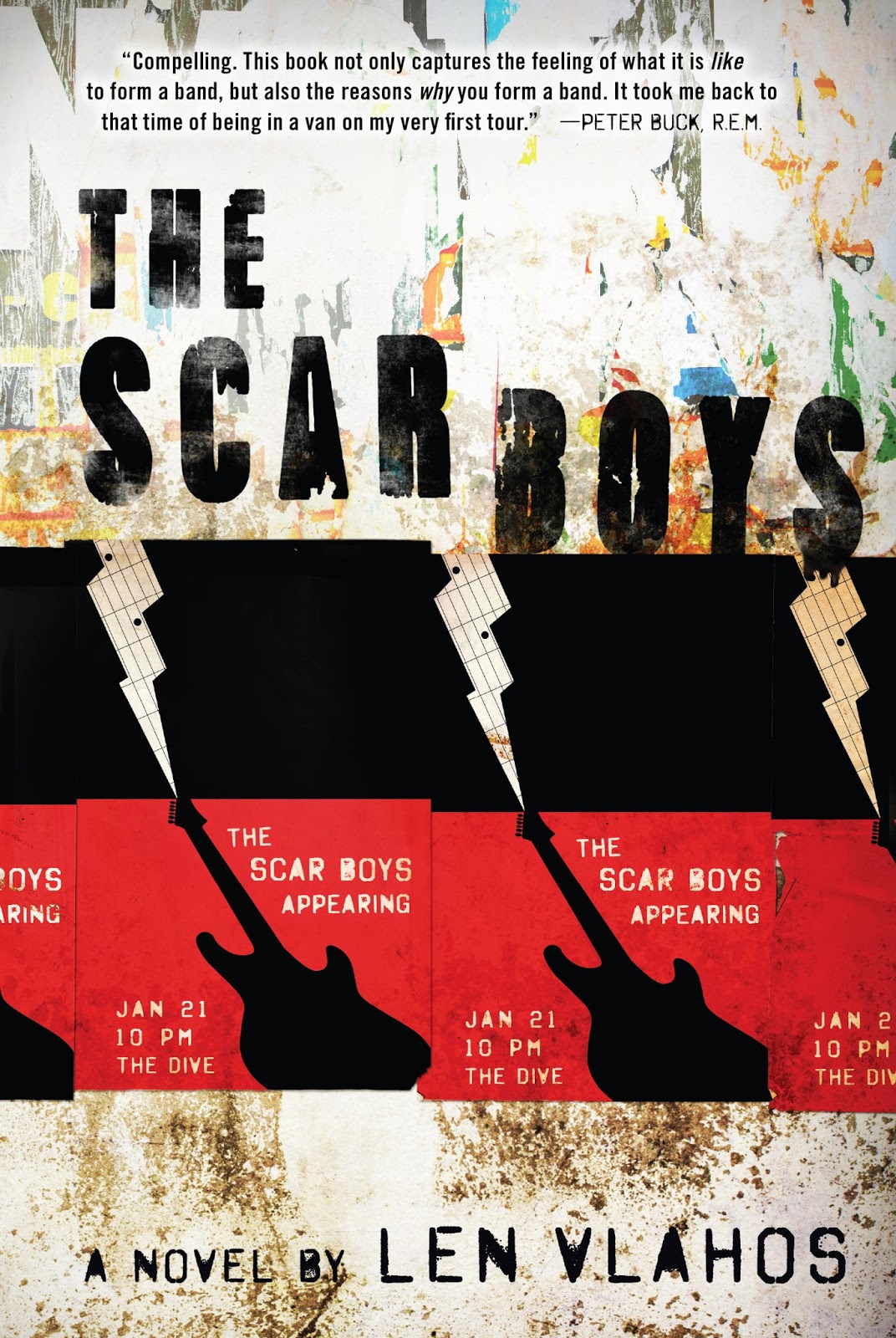 The Scar Boys by Len Vlahos
January 21st, 2014 from EgmontUSA


A severely burned teenager. A guitar. Punk rock. The chords of a rock 'n' roll road trip in a coming-of-age novel that is a must-read story about finding your place in the world...even if you carry scars inside and out.

In attempting to describe himself in his college application essay--help us to become acquainted with you beyond your courses, grades, and test scores--Harbinger (Harry) Jones goes way beyond the 250-word limit and gives a full account of his life.

The first defining moment: the day the neighborhood goons tied him to a tree during a lightning storm when he was 8 years old, and the tree was struck and caught fire. Harry was badly burned and has had to live with the physical and emotional scars, reactions from strangers, bullying, and loneliness that instantly became his everyday reality.

The second defining moment: the day in 8th grade when the handsome, charismatic Johnny rescued him from the bullies and then made the startling suggestion that they start a band together. Harry discovered that playing music transported him out of his nightmare of a world, and he finally had something that compelled people to look beyond his physical appearance. Harry's description of his life in his essay is both humorous and heart-wrenching. He had a steeper road to climb than the average kid, but he ends up learning something about personal power, friendship, first love, and how to fit in the world. While he's looking back at the moments that have shaped his life, most of this story takes place while Harry is in high school and the summer after he graduates.


Add to Goodreads
You Can find Vlahos at his website

Let's meet Len, and stick around for the giveaway at the end of this post!

What are your top 5 favorite books for youth with a musical theme?
GUITAR NOTES by Mary Amato. This is a quiet but pitch perfect story (pun intended) of, if you’ll pardon the cliché, two “star-crossed teens” that share a high school rehearsal room on opposite days. Tripp, a guitar playing under achiever, and Lyla, an over achieving cellist, sort of, if you’ll pardon the second cliché (really, I don’t know what’s wrong with me tonight), “complete” each other. Much of the story is told through notes and lyrics passed between the two. It’s beautiful.

FIVE FLAVORS OF DUMB by Antony John features a deaf high school girl, Piper, who winds up managing a classically dysfunctional high school rock band on a sort of dare, and learns the true spirit of rock and roll along the way. I could not put this book down once I started it.

KING DORK by Frank Portman is flat out funny. The main character, Tom Henderson, aka King Dork, is a teenage boy with all the self-esteem and confidence of Harbinger Jones (yes, shameless plug . . . is it working?). He finds himself in the midst of a mystery connected to his deceased father’s copy of Catcher in the Rye, as well as a full blown effort to be cool, which, of course, leads to him start a band. Tom has a very real and very infectious voice. (And I just learned that a sequel is coming in 2014!)

ELEANOR & PARK by Rainbow Rowell isn’t specifically about music, but music plays such an important role that I have to include it here. The author is, IMHO, one of the most gifted writers around, in any genre. (Add Fangirl to your must-read list, too.) The love story between the two title characters is incredibly real, and the way Rowell uses mix tapes of 80s music as a connection between the two is brilliant.

HIGH FEDELITY by Nick Hornby is written more for an adult audience, but I have to believe that is crosses over to older teens, too. Rob, the narrator, stumbles through life and love, with music seeming to be his only anchor. Yes, the movie is great, but the book is greater.

You started each chapter with a song title that sets up the scenes. Which chapter was the hardest to find a song for and why?
Actually, in the draft that was originally purchased for publication, each chapter head was a snippet of song lyric. For example, in the finished book, the title of the chapter in which Harry is shuttled from doctor to doctor and then meets the psychiatrist (Dr. Kenny) is Bad Brain by the Ramones. The title of the same chapter in the original manuscript was a quote from a New York Dolls song called Pills: “Gives me the shots, gives me the pills, got me takin’ this junk, against my will. . . .”

Turns out that using even a tiny fragment of a song or poem in a work of fiction is not protected by the Fair Use doctrine of U.S. copyright laws. Who knew? Song titles, luckily, cannot be copyright protected, so every chapter heading was changed.

As to which was the hardest? Baltimore by Gram Parsons. I had nothing in my mental playlist even remotely connected to Baltimore, so I resorted to a Google search. (I should probably have thanked Google in the Acknowledgments.) I’m happy with the outcome.

Harry's incident that left him disfigured was the defining moment in his life. Was this incident drawn upon your personal experiences?
I never experienced anything like Harry, but I wasn’t a total stranger to bullying. Harry’s injuries were a way for me to make sure he was completely isolated and alone. As I worked my way through various drafts, it became clear to me that The Scar Boys was really about the transformational power of music. If music was going to save Harry, he needed to be in a place where he needed saving. Writing about his injuries—and about the effects of a lightning strike—involved a lot of research.

Any alternate endings in early rounds of drafting?
Yes!!! In an earlier draft, after the van breaks down, the band decides to steal a car to continue their tour. They plan and plot and think they have every contingency covered, but things go horribly wrong the night of the theft, and Johnny is killed in a freak accident. Fearing for their lives and their safety, the other band members flee the scene. They escape from Athens and continue as a three-piece. As their popularity and success grow, the guilt consumes Harry.

It was fun to write, but all a bit over the top.

What's next for you?
I’m on my way home to have dinner with my family. . . . Hey, thanks for asking! Oh, wait. You probably mean what’s next in terms of writing projects. Yeah, that would make more sense.

I’m putting the finishing touches on a novel that crosses the imaginary divide between adult and teen readers. (I say imaginary because so much good fiction is really appropriate for both. Michael Hassan’s Crash and Burn was marketed as YA but is great for adults; David Benioff’s City of Thieves was marketed for adults but is great for teens. Go figure.) Anyway, it’s a dark comedy about a guy with a terminal brain tumor who puts his life for sale on eBay. The story follows the protagonist (Jared Stone), the eBay bidders, the protagonist’s teenage daughter, and the brain tumor itself (the tumor is a central character), It’s very different than TSB, and I’m really proud of it.

I’ve also started two other projects, one of which is a continuation of The Scar Boys, but this time told from Cheyenne’s point of view, tentatively titled SCAR GIRL.

Be sure to check out all the stops on THE SCAR BOYS blog tour:

Rock on with THE SCAR BOYS playlist on Spotify:
https://play.spotify.com/user/egmontusa/playlist/7yb3rYWaA4APBSkLdcm9WK

Len is visiting 20+ cities and bookstores around the country--and he’s bringing his guitar. His tour schedule is here.

Giveaway! One lucky winner will receive a copy of THE SCAR BOYS (U.S. addresses). Fill out the fancy doo-hickey below to be offiially entered. Good luck!
a Rafflecopter giveaway
at Thursday, January 09, 2014