Review: Our Own Private Universe by Robin Talley 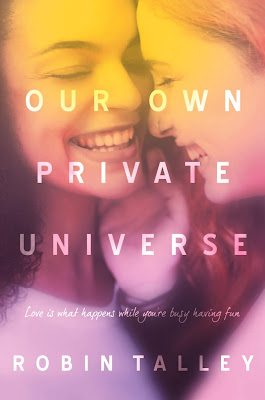 Fifteen-year-old Aki Simon has a theory. And it's mostly about sex.

No, it isn't that kind of theory. Aki already knows she's bisexual—even if, until now, it's mostly been in the hypothetical sense. Aki has dated only guys so far, and her best friend, Lori, is the only person who knows she likes girls, too.

Actually, Aki's theory is that she's got only one shot at living an interesting life—and that means she's got to stop sitting around and thinking so much. It's time for her to actually do something. Or at least try.

So when Aki and Lori set off on a church youth-group trip to a small Mexican town for the summer and Aki meets Christa—slightly older, far more experienced—it seems her theory is prime for the testing.

But it's not going to be easy. For one thing, how exactly do two girls have sex, anyway? And more important, how can you tell if you're in love? It's going to be a summer of testing theories—and the result may just be love.

Add to Goodreads
You can find Talley at her website

Our Own Private Universe is a book about a teen girl going on a mission trip to Mexico with a mission of her own. Fifteen-year-old Aki has only dated guys, but she is interested in girls. She is determined to step out of her shell and see what sparks. Things do spark - immediately - with Christa, an older girl from a different church on the mission trip. Christa goes through the angst of a new relationship and having to keep that secret, and also keep her other personal secrets under wraps. No spoilers here.


I'm always a little uncomfortable reading about young teen sexual encounters. In my head, I kept saying "fifteen is too young" but I am fully aware of what fifteen-year-olds do. I was one a million years ago. Saying that, I was a little perplexed about some of the internal dialogue of Aki, who I was lead to believe was a *little educated in the sex department. I had the initial impression that she was knowledgeable about body parts, feelings, how things worked, etc., but at times her inner voice was young and unknowing. Also, the scenes where Aki want to purchase gloves and dental dams left me...... I know zero bisexual women or lesbians who used this means of protection. (but I am just one person) I think maybe the moments of innocence and time spent searching for contraception was implemented as a safe bet for the author. When dealing with teen sex in books, I understand apprehensions. To me, it just seemed a little unrealistic. Maybe I should be saying, "props to this kid for going out there and taking the initial to stay safe.

There are several things I like about this book. I like the diversity of the characters (and the cover that illustrates the description of the characters - not just two anonymous girls holding hands, but a sweet, intimate moment between two girls), and the positive portrayal of LGBTs and their allies considering they were on a church mission trip. It's nice to see that not every Christian church is homophobic. There are so many more options in places to workshop than I had as a kid.

I was a little concerned about the lack-a-daze*ness about the role of adults and their lack of supervision especially when it came to some of the happenings with the older teens. I've been on a few mission trips to Mexico and every moment was planned for us. We didn't have the opportunity to do anything but work, pray/sing/go to church, and sleep. There was no time to go out drinking, run the town, and be destructive. Lastly, the book was about 50 pages too long, and had your fair share of pettiness and girl drama, which I grow tired of pretty quickly. I feel like this aspect of young female relationships is so overplayed. I think if half of those scenes were cut it would sit about right for me.

Overall, I liked the book. It sparked a lot of memories about trying to figure out where I belonged. It also reminded me of how much I enjoyed going on mission trips when I was young and how maybe as an adult I might not agree with the idea of mission (religious conversion?) trips anymore. Lots to think about!