I've said it a thousand times and I'll say it again, I HEART ME SOME ANDREW SMITH! I got a lovely email yesterday that held the cover to his newest book, Passenger, which is the much anticipated sequel to The Marbury Lens. You can find my review right HERE and an interview HERE. You may have also heard of Stick, one of my absolute top five from 2010. It's a fantastic contemporary set in the 1970s that will blow your mind. Read my review right HERE and an interview HERE. Now, let's get on with the reveal: 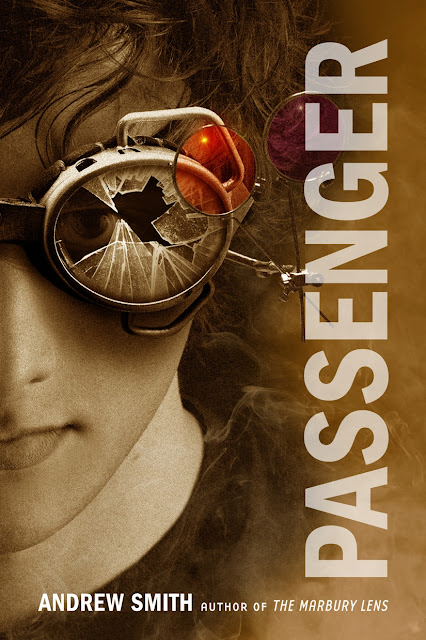 Jack and Conner have a plan.

They think it's the only reasonable way to deal with the Marbury lens.

But the four boys - Jack, Conner, Ben, and Griffin - end up scattered in different places at different times. Jack is lost in a Marbury that isn't Marbury, a Glenbrook that isn't Glenbrook, pursued through every crumbling not-world by an uncaring cop trying to solve the mystery of Freddie Horvath's murder, and a deceitful kid named Quinn Cahill who believes he is the King of Marbury. Jack's universe is collapsing in on itself. He finds his friends. He finds his home.

There's always just one thing, and Jack knows it.

This can't be it.

I think Passenger is a fantastic companion look to The Marbury Lens, which I will also show you below - just to spark your memory. Same Jack, but now his funky eye wear is broken. Smith gave us a little bit of info back in September at the sequel:

"It's about 500 pages at the moment -- quite a bit longer than The Marbury Lens. I will probably tighten it up a bit. But you can never wind a place like Marbury too tightly. Things will break. Well... things actually do break.
I will tell you this: Don't expect the same old Marbury. Don't expect the same old Glenbrook. And definitely don't expect the same old Jack and Conner, or Ben and Griffin, either.
Why would I ever do something predictable?
Pretty much everyone is back on stage in Passenger -- some, more than others. We even see quite a bit more of Henry, and even Uncle Teddy, the Preterist minister. There are some new characters, too. Odds. You'll find out who the Odds are. Oh... and one more thing. You know that train the boys find in the middle of the desert? You get to see what really happened to the... um... passengers on it."
Exciting, right?! I strongly you suggest you jump on the A-Train and become a fan!
Add to Goodreads
You can find Smith at his website and Twitter
The Marbury Lens